Cameroon-Egypt Cooperation: The New Ambassador of Egypt to Cameroon in MINEPAT 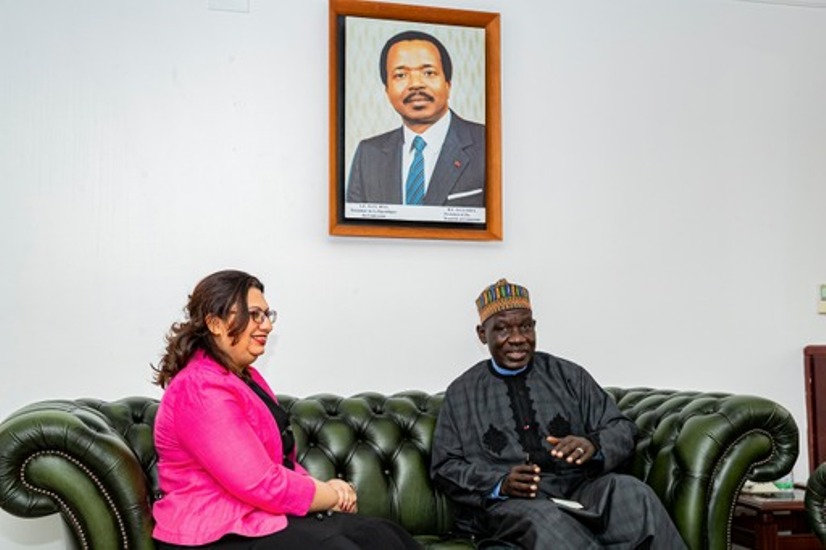 Cameroon-Egypt Cooperation: The New Ambassador of Egypt to Cameroon in MINEPAT

H.E Mme Dalia Fayez Farag Ghubrial has this 11, April, 2022 been received in audience by the Minister of the Economy, Planning and Regional Development, Alamine Ousmane Mey._

Both officials discussed on some specific areas through which the cooperation between Cameroon and Egypt could be fostered. These included amongst others the areas of Wood-transformation, trade, exportation and agriculture. MINEPAT used the opportunity to thank Egypt for its support in various projects in Cameroon naming amongst others the support of Egypt in the Islamic Institute in Ngoundere. He also expressed the desire to nurture a more diversified cooperation between Cameroon and Egypt in a bid to make it more resilient in the face of difficult times.
It was equally a firsthand opportunity for the MINEPAT to hand over the National Development Strategy 2021-2030 to the Ambassador of Egypt. Speaking to the Media after the meeting, H.E Mme Dalia Fayez Farag explained that her country will to start to discuss on how they can cooperate in putting this strategy on the field and expressed the hope that the next time they will have this meeting; it will be to witness the opening of the new project and the new cooperation between the two countries.

Previous Cameroon-GreatBritain cooperation; The Minister of the Economy receives The British High Commissioner to Cameroon. Next Japan grants 1.2 billion CFAF for the enhancement wildlife and forestry in Cameroon